This year marked the 150th anniversary of, the Royal Dart Yacht Club (RDYC). To honour the occasion, the RDYC entered a ship in the Provident Challenge, a race between a number of sail training ships, taking place from Brixham to Gosport. Appeal Home Shading was one of six sponsors of the event.

The ship, appropriately named the Provident, was crewed by a group of 10 young people all of whom face ongoing challenges in their home life, many acting as carers for siblings or parents.

Overseeing the venture was skipper Lara Caine, who was supported by four other volunteer crewmembers. Together the 15-strong crew spent two days getting from Brixham to Gosport, with an aim to beat their sister ship, Leader, to the finish line.

The experience was far more than just a race for those involved. It was an unforgettable bonding experience for all, and for many it provided temporary relief from a difficult life at home, as well as teaching them valuable lessons in human teamwork and camaraderie.

It was a triumphant finish for Provident, who finished third overall. After well-deserved celebrations in the Solent, the crew headed back to the Dart where they met Olympic Finn class gold medallist, Giles Scott.

Clive Bennett, the RDYC Commodore, described the race as “the most rewarding thing” he has been part of during his time as a Commodore of the Royal Dart Yacht Club.

Michael Madigan, Chairman at Appeal, said: “It’s very important to us here at Appeal that we support local communities. We’re delighted to have helped facilitate the bringing together of these young people, helping them escape some of the hardship in their lives and find friendship in this truly impressive endeavour.” 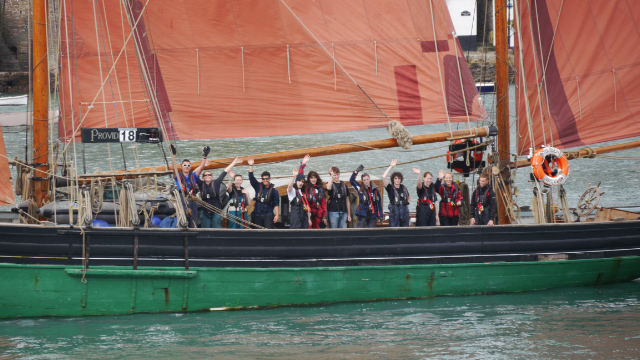